My grandfather, John Stephen Owen Blanshard, began his career in the jewellery trade in 1926. As a young gemmologist he opened and established Tidy & Blanshard, a wholesale diamond company in Hatton Garden.

In 1960 my father, Philip John Anthony Blanshard, joined the family business, also achieving a degree in both gemmology and diamond grading. In 1972 he purchased a jewellery shop at 1 Maryport Street in Devizes, which had already been opened and established in 1866 by Mr. Henry Joseph Johnson. In the premises are still the original 19th century cabinets dating back to the opening of the shop.

I myself, Mrs. Ruth Klomp, joined the family business at the age of 21 having achieved a degree in gemmology with the Gemmological Association London.

I have always recognised the importance of individuality and customer service so that we now pride ourselves in having a long established and loyal customer base, to include the Devizes Town Mayor.

During my 26 years of trading I have seen multiple changes and advances. As a family we place huge value on working together to achieve great things within this fast developing jewellery trade. 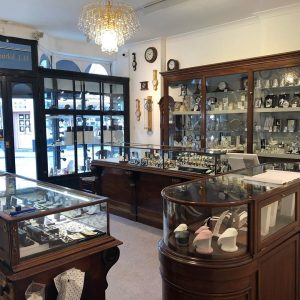 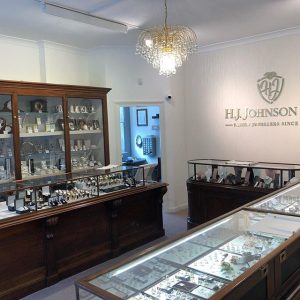 2020 © H.J. Johnson Ltd Devizes
Designed and Produced by Pink Fish Web design Swindon
We use cookies to ensure that we give you the best experience on our website. If you continue to use this site we will assume that you are happy with it.OkRead more